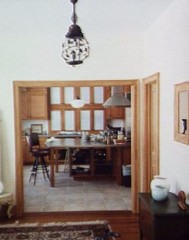 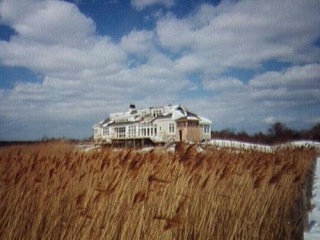 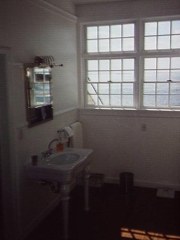 The house is sited on 5 acres on Moriches Bay with 1,100 feet of beachfront. In the late 1980’s, a poured-in-place concrete foundation was laid by the former owner, but the work stopped at that point. The clients wanted a house that was about forty percent smaller than the one originally planned. They also disliked the generic builder’s colonial style house originally intended for the site. The project as built is a 4,600 square foot house (above the foundation,) with another 600 square feet in a finished playroom in the basement. It has six bedrooms and five-and-a-half baths.

There are several ways in which the layout of the house relates to the site and its anticipated uses. The first was to have the cars enter under a wide porch with stairs up on either side. The original house was planned with the garage on the north end, bringing vehicles through the entire site. The new garage location brings the cars in right under the kitchen and foyer area, so that with children’s rooms off the kitchen and the master bedroom suite above the kitchen and dining room, the portion of the house most used by the family is like a smaller house-within-a-house, not only for convenience sake, but to make the house cozier during colder months when there are less likely to be guests.

Two spaces run from the entry side to the waterside of the house, giving the house a more informal quality and maximizing the amount of interior space with views of the water. The first of these “spaces” is the grouped kitchen and screened porch and is located centrally in the more active wing of the house, acknowledging that this will indeed be the center of activity. The second “through” space is the one-and-a-half height living room. This space is setback 3 feet on each side, creating an area for a skylight to the shop (to the east) and exercise room (to the west) in the basement below.