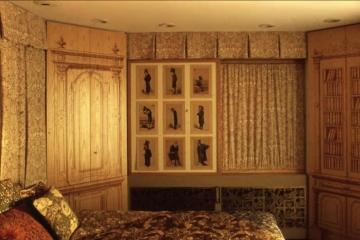 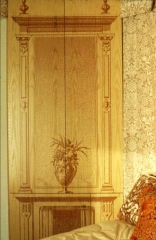 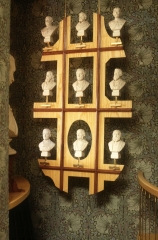 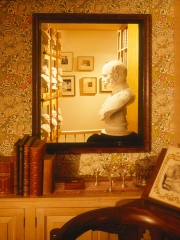 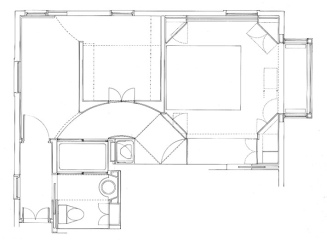 The design for the renovation of a master bedroom and bathroom suite for a Victorian studies professor and a psychologist developed from the style that has evolved in the rest of their home, a combination of Victorian with classic 50’s & 60’s modern furniture.

The new bedroom resembles a four-poster bed that one can walk into. Each “post” is a corner cabinet housing a different function related to the bedroom. Engravings from The Victorian Cabinet-makers Assistant (Dover, 1970; orig. Blackie and Son’s, 1853) have been collaged together, re-proportioned and silk-screened in wood stain on the ash cabinet fronts. The images were manipulated by scanning the engravings and re-proportioning them to fit within the cabinet faces.

The Cabinet-makers Assistant is a book of original furniture designs depicting early Victorian furniture designs two years after the Great Exhibition in 1851. The widespread use of this book as a copybook in woodworkers’ shops large and small, positioned these engravings as icons of their time. Recombining the elements of these engravings in the creation of pieces of furniture was widely practiced. The editors in their preface direct the user to “engraft…the decorations of one of the forms on another.” The “iconic” status of the images is maintained through the re-presentation of the engraving rather than the creation of another three-dimensional adaptation. The pixilation of the images is the contemporary stylistic “graft.”

In between the living room and the stairwell, a niche was created to house a near-life size bust of Prince Albert and nine smaller busts of various “British Worthies”. An opening from the niche to the living room beyond was cut and framed on each side as a picture might be. From the living room, this “picture” is of Prince Albert, the “Worthies”, and the library behind. From the library, a view of the living room forms a backdrop for the still life of the busts. The lesser figures are positioned in a hanging frame, an oval seemingly cut out off an infinite grid of made up of smaller frames, represents the that the busts of the nine statesman displayed are but a small sample of the hundreds busts of “Worthies” available at the time.