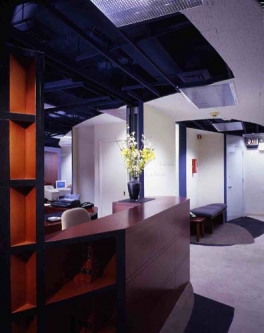 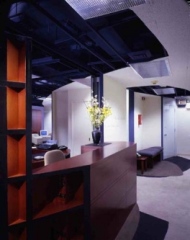 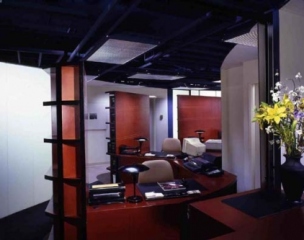 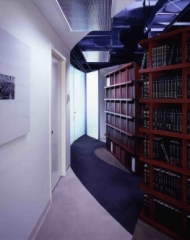 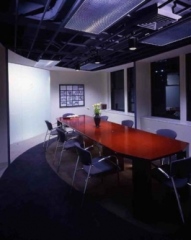 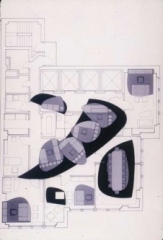 Two small law practices that often referred work to each other decided to relocate together to a small (2,600 square foot) full floor on a high floor on Wall Street.  As part of their lease, the building owner contributed to the renovation cost of the space, however the resulting budget was not adequate for a complete make-over of the space.  Compounding the problem was that the existing layout had been based on the needs of the prior tenant–a financial analyst and newsletter publisher that rarely had visitors and that had no reception area, no conference room, and a labyrinthine circulation.  Upon stepping off the elevators one was confronted by a six foot by twenty-eight foot empty room with three blank doors.

The first two steps in our design approach were taken almost simultaneously, the first was the determination that most of the existing construction would remain, the second decision was that walls (and ceilings) would be removed to create a new vocabulary of voids within which the receptionist, secretaries, circulation, and conference area that the lawyers required could be located.  In order to describe this part of our approach, the work of Gordon Matta-Clark was reviewed and ultimately embraced by the clients.

The third element of the design was arrived at after considering a number of alternative strategies.  New elements such as the workstations, executive desks and consoles, conference table and waiting area furniture were all custom-designed to appear as if it had been extracted (along with a section of carpet) from a typical, (if not stereotypical,) wood-paneled law office elsewhere.  These elements are placed to maximize the use of the combined spaces created by the “voids” and the original open areas, and help unite these two opposed conditions.

The design presents the two firms in a way they wish to be seen: more individualistic and innovative then many of their larger counterparts.  The design grew out of a process where this concern was integrated with solutions to the significant functional obstacles to be overcome, and the very real budget limitations on the project.  Removing the ceiling in the “voids” not only differentiates these areas from the “existing” construction, but alleviates the problem of the eight foot height of the existing hung ceiling bearing down on the newly-enlarged spaces.  The reuse, in their original location, of elements such as doors, radiator covers, window treatment, light fixtures and most of the electrical outlets and switching brought the project in at below $60 a square foot including all construction, security gates, all finishes, furniture, accessories, artwork and fees.